In May of 2014, comic artist Allie Brosh posted on Facebook: “I’m in the process of writing a second book (and also a new post for the blog).” Then Brosh, who had sometimes posted multiple updates per day, went silent. Her webcomic blog that had drawn as many as seven million visitors each month sat idle, too. Fans were left concerned, wondering what had happened.

In the early 2010s, Brosh had become a blogosphere darling, beloved for her quirky cartoon-and-text combination posts. Even casual web surfers couldn’t help coming across her much-memed “CLEAN ALL THE THINGS!” panel, where a stick-figure drawing of Brosh in a pink dress brandishes a broom like a battle sword. For sensitive, goofy kids on the internet, it was comedy scripture. Her first book, the New York Times bestseller Hyperbole and a Half — named after her blog — came out in October 2013, the same month as her final blog post. Seven months later, her Facebook page went dark, and within a year she had totally retreated from public view. 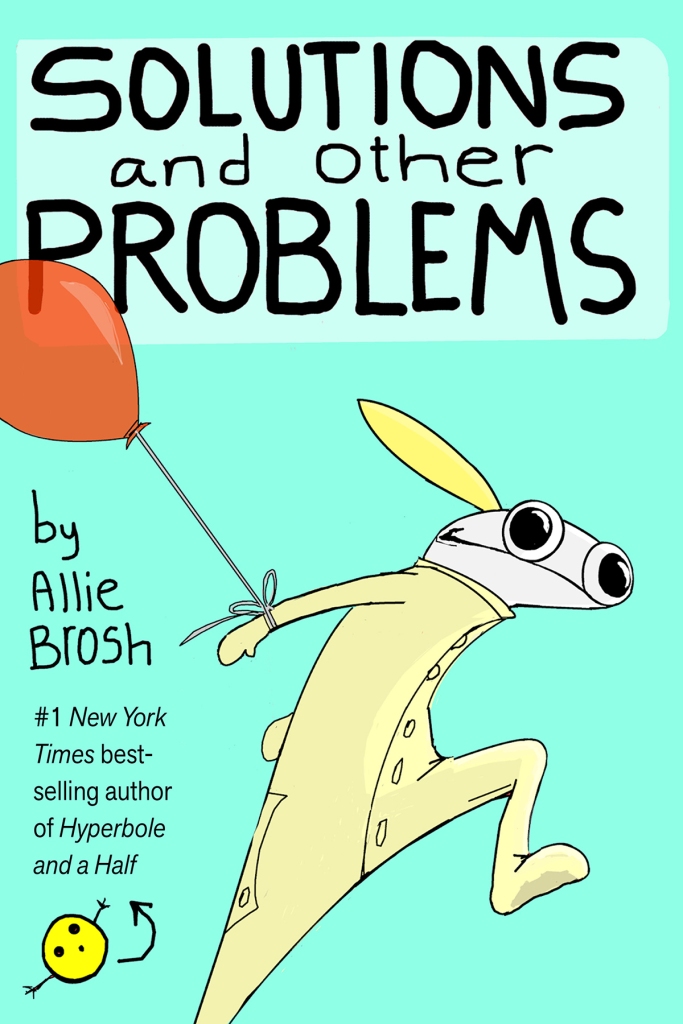 For an artist who had been open about her mental health struggles and suicidal ideations, her ongoing silence was concerning. For six years, her legions of fans wondered where she’d gone. As it turned out, some of what she was dealing with was even worse than the depression many (rightly) assumed was still plaguing her. Readers, worried about her mental health, posted encouraging comments on her social media pages. She didn’t reply. On Amazon, the release date of her next book went from 2016 to 2017 to 2030. Her disappearance became one of the web’s enduring mysteries. Why would someone drop off the face of the internet, just as her career was taking off?

Six years later, Brosh has re-emerged with a second book, Solutions and Other Problems. The 500-page graphic memoir comes after Brosh endured a staggering amount of tragedy during her hiatus, from a life-threatening medical scare, to the death of her younger sister, to the dissolution of her marriage. In the pages of Solutions, Brosh processes her pain while exploring existential quandaries and bizarre adventures from her youth as she’s always done: through jokes. “Comedy is a very important coping mechanism for me,” Brosh tells Rolling Stone. “It’s a way that I found to relate to things that helped me deal with them.”

Brosh started her blog is 2009, while in college at the University of Montana. She started out mostly writing but, in a search for efficiency, gradually transitioned to drawing, tapping into a knack for visual art she’d had since she was a kid. “If I don’t know how to describe something with words, I might be able to draw it,” she says. “Words aren’t always the best tools for communicating. They’re slow and cumbersome. Pictures turned out to be the speedier solution I was looking for.”

The way Brosh renders herself is part of what makes her work unmistakable: She appears frog-eyed and neckless, a stick figure in a pink dress with a blonde shark fin of a ponytail protruding from her head. To Brosh — who compares herself to animals and bugs in conversation with notable frequency — being creature-like makes it harder for the reader to make assumptions about her as a character. “There are a lot of distracting things about humans,” she says. “There are ways we’ve learned to interpret each other, based on all these outside clues. Drawing myself in this spastic, animalistic way allows me to communicate more directly about the things I’m trying to talk about without using this confusing [human] vehicle as a medium.”

In college, Brosh had planned to be a biomedical researcher but had what she’s described as an “identity crisis” and balked at the end of her undergraduate studies. “I am not cut out to be a productive member of society,” she posted a few days before she graduated in 2009. “If my blog can become famous and profitable, I will be rescued from the brink of adulthood.” It may have been a college senior’s career panic talking, but it set her on the path to comic greatness.

Besides, at the time, trying to get paid to blog wasn’t such a crazy gamble. In the early 2010s, sites like Gawker and Jezebel were at their peak, and personal bloggers were doing well, too. According to blog search engine Technorati, 12,000 new blogs were being launched every day in 2010, and 11 percent of bloggers surveyed were supporting themselves. Soon, so was Brosh. Adulthood successfully evaded.

Around the time she launched the site, Brosh had begun experiencing worrisome medical symptoms. She describes one incident at a bar with friends shortly after she’d graduated. (It turns out, Brosh also drew a post about this experience.) She hadn’t been feeling well, so she ordered raspberry tea. Feeling worse, she excused herself to the bathroom. While she was in there, she fainted. “I had to, like, drag myself off the floor, and I would fall, lose consciousness again, and wake up again,” she says. “I don’t know how long it took me to get out of the bathroom, but I eventually was able to stumble into the hallway.” Her friends took her to the hospital, where doctors couldn’t figure out what was wrong or how to treat her.

By the time her book came out, in 2013, the issue was coming to a terrifying head. She’d fainted several more times over the years. Doctors eventually determined she had endometriosis, and that she’d been bleeding internally from tumors that had ruptured. Seven weeks before her book tour, Brosh underwent all-day surgery, including a hysterectomy, to remove the masses and, the way she describes it, detangle her insides. “My surgeon has been doing these surgeries for like 35 years,” she says. “And he described it as the worst case he’s ever seen. I feel very proud of that.”

Brosh managed to do her whole three-week publicity tour, signing books and meeting fans from Seattle to Brooklyn, but she says afterward she crashed, entering a state of deep depression. She canceled plans to travel to her parents’ home in Idaho for the holidays, a decision she still regrets. That New Year’s Eve, her younger sister, Kaitlin, 25, who had struggled for years with bipolar disorder, died by suicide when she drove her car in front of a train. “You know that death can happen, and that it’s horrible and everybody’s scared of it, but this is the time in my life that it had been closest,” she says. “And I did not know how to deal with that.”

Part of how she dealt with it was putting her sister in her new book, in comics about their childhood together. “That part [of the book] started out a lot shorter, and as I was writing it, I realized it was turning out to be a very therapeutic tool for me,” she says. “In drawing these pictures and capturing these experiences, I felt like I was getting to interact with my sister a little bit again.”

Brosh doesn’t remember her exact mental state when she posted on Facebook that spring about her next book. Her marriage had begun unraveling — she and her first husband finalized their divorce, amicably, in 2016 — and her parents split up around then, too. She thinks she may have been trying to prove she was still OK, amid everything that was going on. “There was a part of me that was having a very intense reaction to feeling helpless, like I almost felt reckless,” she says. “I wanted to demonstrate to myself that I could do without any of the things I cared about.”

It had been, to borrow from Brosh’s canon, a lot. But here she is.

Her new book is out, and it’s even rawer, realer, and funnier than the last; she’s updated her blog with a free chapter for fans about breaking into her neighbor’s house through the doggie door when she was a kid; and she’s returned to public life. “It’s a little startling,” she says. “I spent a lot of time alone and a lot of time not being in the public eye. It feels like being an animal getting reintroduced to the wild. Like, oh my goodness, people can see me.”

She isn’t alone now. She’s been at home in Bend, Oregon, during the Covid-19 pandemic with her husband, Kevin, and their cat, Squirrel. Feeling better is a constant journey for Brosh, and it isn’t a straight line. One day she may be deeply comforted by connecting with a reader online; the next she’s standing in the kitchen, crying and feeling hopeless. “I don’t know that I will ever return to the state of being that I was in before I became depressed,” she says. “I’m starting to accept that this might be a component of my life, and I need to learn how to adapt to that rather than trying to make it go away.”

Her progress over the past several years is in part thanks to her psychiatrist, whom she now FaceTimes every week. Another huge factor has been a budding friendship with herself. “There’s been times over the last years that I felt incredibly alone,” she says. “I’m making an effort to get to know myself and who I really am.” To that end, Brosh has a file on her computer, “Talkin Bout Shit With Myself,” where she’ll type two-sided conversations, asking how she’s doing, and allowing herself to vent. As always, such vulnerable moments are shot through with comedic absurdity, even for an audience of one. In one chat with herself, Brosh wrote, “Do people think I act like a crab?” She answered:

“You know the way crabs are like, sideways crawling away, with their eyes…?”

Hanging out with herself has also led Brosh to ponder what kind of person she wants to be. “I spent so much time thinking, what do other people think about me? It’s only recently occurred to me to wonder, what do I think?” Asked what she does think about herself, Brosh’s voice breaks. “I think I’m sincere, I think I try really hard to be fair. I think that I care about other people, and I want to reach out and touch something — God, I’m tearing up — like, reach out and touch something in the void.”

Brosh doesn’t want to ghost the world again. She’s going to try really hard not to. She even started an Instagram account, to encourage herself to keep in touch. “I asked for people to care about me or pay attention to me,” she says. “In hearing how concerned people are when I go silent, I’m starting to think that something else is needed [from me]. I just haven’t figured out where my responsibility to my readers and my responsibility to my introverted tendencies meet.”

She’s already begun working on her third book, a process she’s discovered she likes better than blogging. “It feels like I’ve found my medium,” she says. “Writing books feels like a healthier way of being creative than something where I’m posting things individually.” Who knows how long book three will take to complete. In an online world of constant content-churn, Brosh is a holdout: someone who will not be rushed.