In 2018, pot reached a tipping point. A clear majority of Americans now wants to see the drug made fully legal. California and Canada began selling marijuana to anyone over 21. Corporate behemoths like Altria (parent company of Marlboro cigarettes) and Constellation Brands (parent of Corona beer and Svedka vodka) made multi-billion dollar weed investments. And Senate Majority Leader Mitch McConnell (R-KY) managed to include hemp legalization in the 2018 Farm Bill — de facto legalizing every part of the cannabis plant except THC.

But at the same time, pot prohibition is not over. Well over half a million folks are still arrested for possession every year. Smoking weed or working for a pot company can still threaten your housing, employment, immigration status, finances and freedom. Cannabis business models, regulatory environments and market valuations shift on a daily basis.

What happens in 2019 will undoubtedly affect each of these issues. To better understand where weed is headed in the next 12 months, I called more than a dozen of the most influential and savvy folks in marijuana: CEOs, scientists, political activists, financial analysts and of course, people who have been growing illegally for decades. Here are their predictions for 2019:

A Weed Grows in Davos

First up, the good news. “Within the next two years, a majority of the United States will have adult-use legal cannabis,” predicts Graham Boyd, a longtime bigwig in cannabis political fundraising who now runs the influential, pot-focused New Approach PAC. “And some of that, roughly half of that, could happen through state legislatures.” Though Vermont legalized the possession and use of cannabis through the legislature, all nine of the states that legalized adult-use sales and commercial production have done so via ballot initiative. But in 2019, politicians will finally catch up with their constituents, explains Boyd. States that could potentially legalize through the legislature include New York, New Jersey, Connecticut and Illinois. Meanwhile, movements to get a legalization initiative on the ballot in 2020 are underway in states like Arizona and Ohio.

All this should mean that Congress is finally going to take federal marijuana legalization seriously in 2019, right? Well, maybe. Neal Levine, a Colorado-based cannabis lobbyist who has spent the past few years in Washington D.C. working on behalf of some of the country’s biggest weed operators, is cautiously optimistic about the 2019 chances for the narrow and pragmatic bill, the STATES Act, that he helped put together. Co-sponsored by Sens. Elizabeth Warren (D-MA) and Cory Gardner (R-CO), the STATES Act would give anyone following state marijuana laws a reprieve from federal consequences — meaning weed businesses could, at long last, get bank accounts, take tax deductions and stop freaking out about potential criminal liability.

“Prohibition is a tangled web that took years to build, and it’s going to take years to unwind. The STATES Act is not the whole loaf but is the essential first step,” says Levine, who this year founded the Cannabis Trade Federation. He’s optimistic in part because he’s gotten “an incredibly warm reception” in certain offices on Capitol Hill “that no one would have believed,” adding, “This is a non-partisan issue.”

But up on Wall Street, the analysts aren’t so sure.

“Within the next two years, a majority of the United States will have adult-use legal cannabis,” says one expert.

“It’s almost inconceivable to us that Donald Trump would sign any legislation sponsored by Elizabeth Warren,” says Cowen and Company Managing Director Vivien Azer, who has played a key role in her firm becoming one of the first investment banks to take cannabis seriously. “We do not rule out Trump making a move on cannabis, but that would be more of a 2020 event moving toward the election. It might be politically advantageous for him to co-opt the issue from Democrats and be the hero.”

Predictions on the federal level are more optimistic when it comes to research — especially when it comes to CBD and cannabis as a pain-relieving substitute for opioids. Dr. Adie Poe, a neuroscientist at Washington University in St. Louis, says she’s thrilled about two major developments in 2019: the consequences of the 2018 Farm Bill having effectively legalized CBD and other promising compounds, and the National Institute of Health’s HEAL initiative, which is focused on solutions to the opioid epidemic.

The money from NIH, in particular, could be game-changing, Poe says.

“The last time we had a funding boom like this was for HIV research in the Nineties,” she explains. “This is a once-in-a-lifetime opportunity to find out what is the role of cannabis in the opioid crisis, and how can we use it as a first-line analgesic, rather than as a last resort.”

As for the 2018 Farm Bill, it’s not yet clear what the regulatory landscape will look like for CBD in 2019. Poe believes researchers will soon be able to access CBD without jumping through the hoops necessary to acquire a Schedule I drug license from the DEA, which could finally allow scientists to provide more evidence of the compound’s uses and dosage. Still, many people in the cannabis industry are concerned about what the exact guidelines will look like on the commercial production side, and how the rollout will go.

For business owners who have been involved in the weed game for a while, another aspect of the 2018 Farm Bill has proven a troubling sign of the times: anyone with a drug felony conviction in the past 10 years will not be allowed to participate in the legal hemp and CBD market.

“What the fuck is that?” asks longtime cannabis cultivator Bill Levers, who runs an influential Instagram account through his California-based company, Beard Bros Pharms. “No one got rich on hemp. There were no hemp cartels. So why would there be a restriction?” 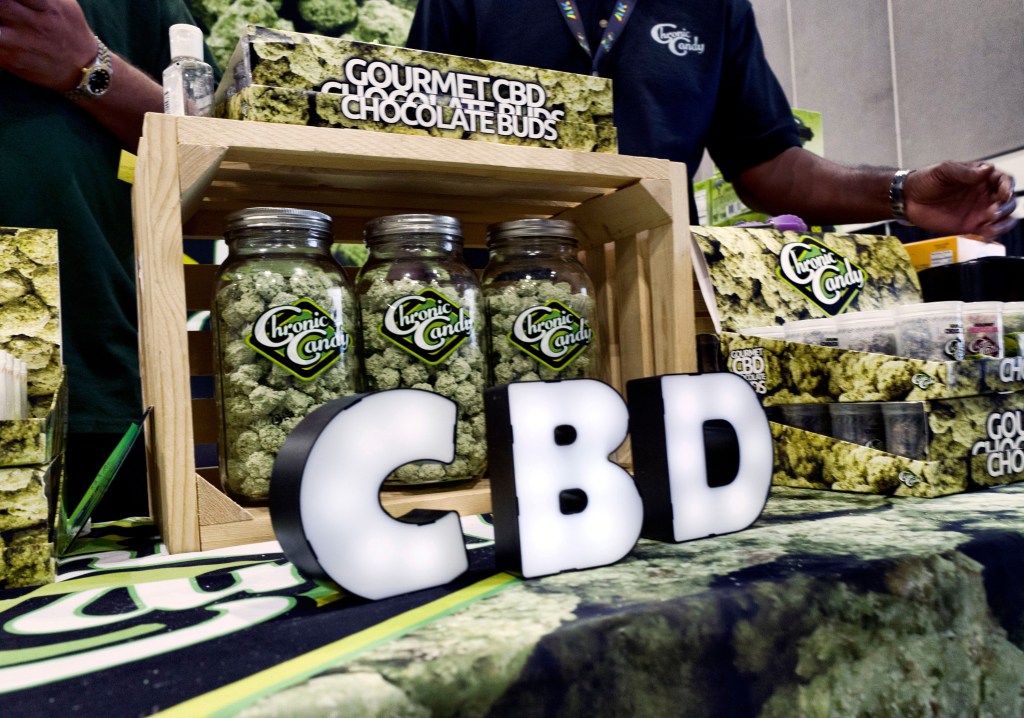 Experts predict that there will be huge growth in the types of cannabis products available. Photo credit: Richard Vogel/AP/REX/Shutterstock

The drug-felony provision in the Farm Bill cuts to the heart of one of the biggest unresolved problems facing the marijuana movement in 2019: the persistence of the illicit market, and the struggle to accommodate folks who have been illegally selling or growing marijuana for years. It is now widely acknowledged that barring people with drug felony convictions from the cannabis industry is racist, as white people with experience on the illicit marijuana market are far less likely to be arrested or convicted. But even without a criminal record, making the transition from outlaw to mogul has proven incredibly difficult, and many of the people who have tried have already given up.

“The last time we had a funding boom like this was for HIV research in the Nineties,” says one researcher.

Taxes, in particular, are a thorny issue. Local and state governments generally consider pot taxes to be a primary incentive for legalization, but if tax rates are too high, fewer growers and dispensaries will try to go legal. Already, lax oversight and an oversupply of legal cannabis in states like Oregon and Washington have led to diversion rates of at least 30 percent — meaning at a minimum about a third of legal pot is being sold on the illicit market. Meanwhile, in places like California, Canada and Michigan, hundreds of illegal storefront marijuana dispensaries compete with legal vendors, consistently undercutting them on price. Illicit operators tell me again and again that they cannot afford to survive in the highly taxed and regulated legal market, so they intend to continue breaking the law — sometimes while simultaneously operating a legal business.

Because wealthy (and typically white) applicants have an easier time covering high taxes and licensing fees, some states and municipalities have created so-called “equity” programs to ensure a more diverse industry. In 2017 and 2018, places like Oakland and Sacramento garnered fawning headlines for setting the lofty goal of legislating solutions to the catastrophic and racially disproportionate impact of the War on Drugs. But moving into 2019, California cannabis operators of all colors and political stripes now often describe equity a well-intentioned idea that is failing in practice. The words “tokenism” and “paternalistic” come up a lot.

“Equity is a marketing tool. All of the licenses are going to be given to the people with the most money,” predicts Ophelia Chong, the founder of StockPot Images and executive creative director of Aura Ventures. “Social equity will work for a few, but even then it will be 2 percent [from disadvantaged backgrounds], and those 2 percent will have to really climb a mountain to do it, with no help.”

Outside of California, however, including equity and restorative justice in cannabis legalization remains an alluring prospect.

“What I like about California is they give a chance for minorities to get in. They doing the opposite in Michigan,” says Jason, whose cannabis social club, the OMS Dab House, has been a crucial gathering place for Detroit’s marijuana movement for the past decade. Michigan legalized adult-use cannabis in 2018, but as in California, quasi-legal medical dispensaries began proliferating years ago, serving stoners and sick people alike. (The ongoing legal confusion around sales and social spaces is why Jason preferred to not give his last name).

Though the city of Detroit is more than 80-percent black, black activists there have previously asserted that only three to five percent of local marijuana dispensaries were owned by black people. Jason predicts that, as Michigan’s legal cannabis industry becomes increasingly corporate and consolidated, those numbers will only go down.

In California, too, experts like attorney and consultant Pamela Epstein, of GreenWise Companies, predicted massive consolidation and business failure in 2019.

“Social equity will work for a few,” says one industry expert. “But those few will have to really climb a mountain to do it, with no help.”

There is, however, one bizarre new option available to small marijuana business owners: taking money from investors in Canada, or at least from investors who are funneling their money through Canada. Now that our neighbor to the north has legalized weed, allowing for a much easier flow of both private and public money to marijuana businesses, Los Angeles is suddenly awash in suits from Toronto bearing millions of dollars.

Cam Mingay, a senior partner at Canadian law firm Cassels Brock, has helped several marijuana companies in the U.S. raise money by going public in Canada. His firm worked on the Canadian IPO of multi-state U.S. cannabis operator MedMen. “Virtually every company I introduced has been capitalized,” he says.

“On a global level for the industry, 2019 will be characterized by product innovation,” says the CEO of a Canadian cannabis company.

But while the hustler-hippies who learned their trade on the illicit market fume over competition from Big Tobacco and Big Alcohol, the corporate-trained folks who run and analyze the new class of marijuana mega-firms are entering 2019 giddy with excitement. For them, cannabis appears to be a shiny, brand-new industry, with infinite opportunity to establish new brands, formulate new products, and bring in consumers who weren’t interested before. For Mike Gorenstein, CEO of Canada’s Cronos Group, accepting $1.8 billion from Altria wasn’t about selling out — it was about being able to use the tobacco giant’s know-how.

“On a global level for the industry, 2019 will be characterized by product innovation,” Gorenstein says. “We have this influx of specialists and creative people from other industries — whether its food, beverage, tobacco, cosmetics — coming into the space and working with cannabis experts on developing products.”

Other CEOs and financial analysts echoed this prediction: more outsiders will arrive with more money and more expertise, and they will reshape the cannabis industry to look more like wherever they came from.

“There’s going to be new entrants who do other types of consumer products, and you’re going to see large investments from companies that will surprise you. It’s not just going to be alcohol and tobacco,” predicts Mitch Baruchowitz, the managing partner at cannabis investment firm Merida Capital Partners. “And now there’s enough of a supply chain where if you have a brilliant idea or methodology you can get the science and supplies and support to match up with your ideas. So we’re going to start to see products that really specialize.”